The Medic who not only can deal massive damage but also sometimes look after their allies seems to be close quarter, medium armor wearing healer or damage dealer. Wielding Shock Paddles, They’re a melee brawler which makes them so different to the likes of the Esper or the Spellslinger. You need to move very closely and to deal damage personally and heal your allies which make this class particularly tricky to master. 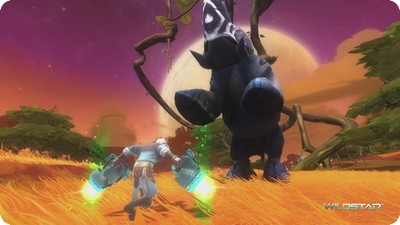 Powerful group healing skills.
Having ability of effect attacks and heals.
Provided with some useful mobility skills to get in and out of combat.
They are not as squishy as the Esper or Spellslinger because of the medium armor they have.

More easily attacked in PvP due to their healing and damage potential.
Relies excessively on building Actuators to use skills.
Want to be more effective you have to be in the thick of combat.
No viable ranged attack options are available. 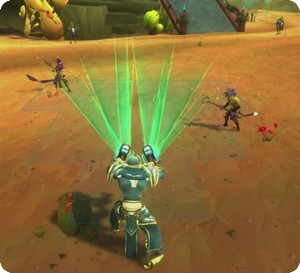 More micromanagement needed, the Medic mechanic is not similar to the likes of the Spellslinger and is a little harder to explain. At the bottom of your screen you’ll see 4 cubes with 3 visible sides. The cubes are known as Actuators. You will consume one or more of these Actuator’s if you want to utilize some of the damage or heal orientated skills of the Medic. When the Actuators turn into zero, you’ll be unable to use any more of the dump skills until you’ve built up your Actuators again. you can do this in several ways：

The primary method to charge Actuator is to utilizeyour pump skill repeatedly during combat. Each pump skill can produce 3 “stacks” before being converted into 1 Actuator (thus 3 sides to the Actuators on the User interface). Alongside this the Medic has an innate ability called Energize. This buff on a 30 second cooldown will restore all your Actuators and dependent on whether you’re above or below 30% health will provide further buffs:

You can imagine that utilizing this mechanic to its maximum potential needs great skills. Not only do you have to monitor. Not only do you have to monitor your use and need to continually pump and dump but to also use Energize at the opportune moment. Many poor Medics I encounter make the mistake of fail with this class by pumping too little (thus starving themselves of Actuators), using their dump too little (thus crippling their damage output) or using their Energize too early (thus significantly reducing their damage spike potential).If you want to make your mechanic more effective and powerful you just have to manage your Actuators precisely and pump and dump as often as humanly possible.

Different from the Spellslinger and Esper(though both those classes can last a long time in the right hands) the Medic is particularly hardy. With Medium armor and if you’re damage focused it can survive a reasonably long time by itself without healing intervention and if healing focused. It can easily survive unless you screw up your pump and dump rotation. Itdoesn't mean that they are invinciblebecause if they’re pressured heavily they’ll struggle to build Actuators quickly enough to use their dump skills. One of the biggest difficulties to a Medic, once you’ve gotten to grips with their mechanic, is to stay in amongst the fights without taking too much damage, there are some choices here for you:

Equip a skill such as Urgency which can be used aggressively to teleport you into/out combat.

For Medic, dispel skills is very useful it will keep you debuff free from slows, roots and snares.

Try to utilize skills such as ML or PS to keep your foes in place.

Use restrictor to avoid danger or and with some practice, use it backwards so you teleport into a fight (I love doing this).

Besides this, you should practice enough times and have a clear picture of which telegraphs you can withstand and which you should keep away from it. I’d always say try to keep a safe distance to them but for the most of time it isn’t always possible. If you want to maximize your damage output you need to resist retreating from frontline instead get stuck in. Bearing this in mind, as  mentioned before, that as a Medic your damage output is entirely reliant on your pump and dump mechanic. More about Medic, there are two pump skills and 4 dump skills (two healing and two damage dealing).

You can see form the list above, the damage and healing options can contribute little for pumping, putting your reliance on these two skills crucial but also relatively repetitive. Filling 4 Actuators will take 4 casts of Discharge or Emission while two uses of Gamma Rays, Quantum Cascade, Crisis Wave or Shield Surge will deplete your Actuators entirely. Although there are other   guides talking about builds, most people don’t equip 2 dump skills though it is viable to take both Crisis Wave and Shield Surge. 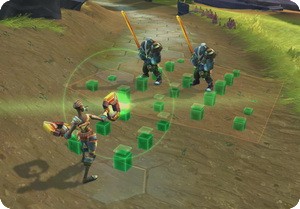 Don't hesitate to use your pump skill. Whether you are healing or damage healing, it’s your default damage skill and is crucial to your acquiring Actuators. If you want to be DPS specialized, always dump your skills whether using Gamma Rays or Quantum Cascade. There is no need for you to keep hold of your Actuators because your other skills don't consume them. If your healing specialized remember that Emission costs very little Focus, so even if you're running on empty you'll still be able to heal your allies.

As a healer you need to be a little bit more vigilant about your Actuators and Focus as even if you have the right amount of Actuators, if you don’t have the focus you won’t be able to use the skill.

Don't forget to chain skills together to make maximum use of Actuators + Focus based skills. A great example is to use Paralytic Surge( stun )> Annihilation> Fissure > Quantum Cascade ( until Actuators are depleted).

Energize, your innate skill, is your “Oh shit!” and your “DIEEE!!” button. it can restore your Actuators to full and allow you to double-spike your heals or your damage output. It’s easy to melt faces with Energize because if your Actuators are already full, you can use Quantum Cascade or Gamma Rays 4 time (QC > QC > Energize (Full Actuators) > QC > QC).

Keep in mind that Energize also provide a shied boost when you’re below 30% HP, that means that you can fight for that little bit longer and hopefully win the fight.

Generally, Medics can survive for a long periods but you need to remember that when you are in dangerous situations such as being  in melee range is filled with risks and you need to  be prepared to take damage and be debuffed regularly.

When facing heave pressure from damage received or if you need to heal others repeatedly, the Medic can struggle. Relying so heavily on Actuators for your big heals and damage skills mean you should be able to predict fights. As we can imagine, Energize is designed for those moments when you need back to back heals and/ or DPS.