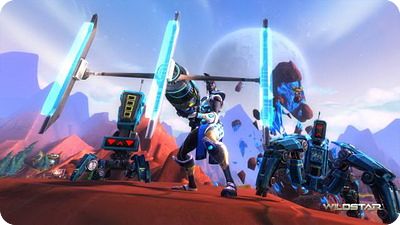 Unlike other tanks in the genre, the Engineer in WildStar is one of three tanks, is capable of tanking from range instead melee. With a launcher in hand (that’s a hand-cannon to you and i) , the Engineer can also use a variety of AI controlled pets that are able to deal damage or taunt enemies. Exo Suit is necessary for Engineer to play as a tank and damage dealer, which has two modes: Eradicate and Provoke. With this suit, the Engineer can run at full speed while attacking but also bolsters their defence or offensive dependatn on which mode you active. Keep in mind that when the Engineer is out of suit has his speed reduced when attacking (75% movement speed) and as mentioned above is only capable of running full speed while attacking but also bolster their defense or offensive dependant on which mode you active. It can be hard, for many people, this can be difficulty to overcome as running slower in combat compared to other classes takes time to get used to. Fortunately, even though the Engineer cannot move faster in combat he can absorb plenty of damage and can melt faces ridiculously quickly at level 50. No really, his damage is amazing. 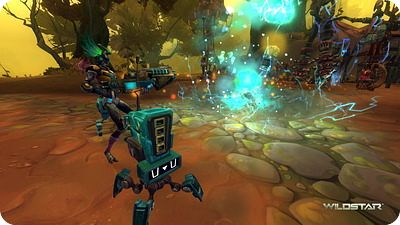 The Engineers mechanic is a power bar that requires volatility. As you attack with your builder, you’ll create Volatility per attack which you can then unleash. When it comes to building Volatility there are two options available for you. A direct damage attack that generates 15 Volatility per hit ( Pulse blast) or Flak cannon which generates 5 Volatility per tick. Fortunately, the two skills are not the any two ways to build Volatility as there are extra options (though they are on cool downs) while yourExo Suit also generate considerate amount:

Use your Volatility when you have enoughvolatility and the Engineer’s” spenders” or “dump” are incredibly powerful. You can collect a maximum of 100 Volatility but can begin to spend it at any time: Electrocute is the primary spender most Engineers prefer because of it hits like a truck and slowly uses your Volatility over a period of time. Other skills such as Bolt Caster need 20 Volatility and Mortar Strike costs 60 Volatility.

Actually the Engineer is not an easy class to play.It has very few escape skills and cannot run fast when using its skills make it an easy target both in PvP and PvE. Even if you aren’t wanting to tank, you still attract the brunt of most attacks from enemies as they quickly approach you.What I will emphasize is that you need to establish a clear divide between how you play PvE and PvPwith totally different skill sets. In PvE bots perform reasonably well, especially the bruise bot that’s capable of holding agro easily. However, in PvP bots are pretty useless and you’d be much better taking other skills to survive.

Keep in mind that the engineer is very fragile when without armor if focused. The first reason is that, as mentioned above, its escape skills are limited. Instead the Engineer relies on raw mitigation to get them through fits. Interestingly as a ranged tank you should not expect to simply to simply stay at the back of encounters taking no damage. Instead and due to the nature of enemy encounter, once you’ve draw aggroenemies will quickly be in melee range of you. Subsequently and unless you are using a Bruiser Bot to take aggro for you, you’ll still be face tanking like Stalkers and Warriors. One good news is that you can switch to Provoke mode to increase your resistances and reduce the damage.

On the whole, I found the Engineers involve a lot positional play in PvE and PvP to keep enemies taunted but at the same time not to leave themselves too vulnerable. In PVP if you overextend, it’s without question that you’ll be killed and unlike other classes you do rely heavily on healers. 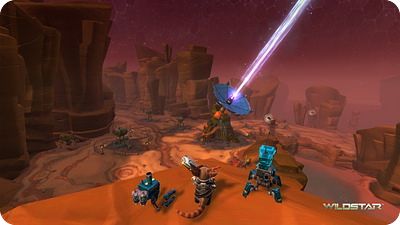 Remember that positioning is curial to Engineer, especially in PvP. Try not to overextend and ensure that you can retreat quickly.

If you do decide to tank, choosing Bruiser Bot is a great support skill as it is capable of taking large amounts of aggro for you.

Try to take advantage of Bots in PvE as they are good for keeping aggro from you. In PvP however, the Artilery and Bruiser Bot is pretty poor. Fortunately the Repair Bot has an excellent active shield heal (though it requires AMP investment) while the Diminisher Bot has a brilliant knock down at Tier 8.

Remember that you always need to build up your Volatility before you can spend it. you can however spend it the moment you have some.

Although you’re a ranged tank you’ll need to be prepared to face tank as many enemies will still quickly approach you. Engineers are capable of dealing enormous damage if they specialize for DPS – don’t feel like you just have to tank! Remember that you have limited escape skills so try to palace yourself on the outskirts of fights so you can exit quickly if you need to.

Try to build up your volatility first, spend it and then use your Suit. This gives you twice the cycle of volatility to spike down players. Remember your Exo Suit not only generate Volatility but depending on its mode allows you to run at full spend while attacking and increase damage/resistances.

HOW TO MAKE MONEY IN WILDSTAR