This overview guide will be focusing on the Wizard's classes in a way that hopefully is easy to understand for inexperienced players overwhelmed by the game's class system without much of an idea of what to do with their characters.

Each class here is given an overview paragraph denoting what it specializes in as well as a brief look at their skills for you to think over and compare. 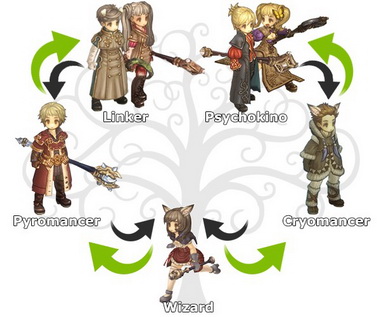 Wizard
The base class, Wizard starts and ends fairly simply compared to the other classes it can pick up. Circle 1 is functional enough but it's hard to deny the usefulness of Surespell (Circle 2) and Quick Cast (Circle 3). If you're going heavily into classes with long cast times both skills can be hugely helpful.

Cryomancer
All of the Cryomancer's skills deal ice damage and most provide some much-needed CC in the form of freezing. This is more of a utility class than Pyromancer. Going deep into C2 or C3 is best done if you need more CC in your build rather than damage.

Psychokino
Psychokino is another CC-heavy class but handles it differently from the previously highlighted Cryomancer and other debuff-oriented classes because of its increased focus on controlling the field and staying safe with its Telekinesis, Swap, and Teleportation skills.

Psychic Pressure - Inflicts continuous damage to a target at the cost of 1% SP consumed per second.
Telekinesis - Picks up an enemy, throws it, and deals damage. You can choose where to throw the target.
Swap - Lets you swap places with an enemy. Can swap with multiple enemies at a time with more levels in Swap.
Teleportation - Teleports you to a random location within the skill's range.
Magnetic Force (Circle 2) - Pulls enemies within range together to deal damage to one another. Can be specced into via attributes to stun.
Raise (Circle 3) - Lifts enemies into the air for a few seconds, designating them as flying type.
Gravity Pole (Circle 3) - Shoots out a line of energy that pulls enemies into it and deals continuous damage at the cost of 2% SP per second. 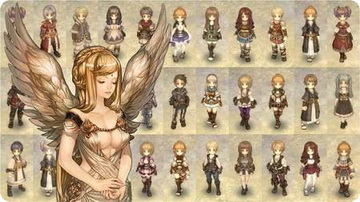 Linker
Linker is just one of the support-oriented classes Wizards can pick up. There's not much damage to be found in Linker but its enemy and party-linking abilities are indispensable at higher levels. Lifeline (C3) in particular is an amazing boon to any party but requires you forgo the damage you'd get from going C3 in other classes.

Unbind - Disconnects all links.
Physical Link - Connects party members to share damage between them, lowering the damage taken by an individual. The more links (the more points spent in it), the less damage an individual takes.
Joint Penalty - Links enemies together so they share damage taken.
Hangman's Knot - Tightens the link to cluster enemies together. Binds for a short time.
Spiritual Chain (Circle 2) - Links party members together to share buffs.
Lifeline (Circle 3) - Shares a party's highest stats among all its members. For instance if one party member has DEX higher than the rest, that stat will be shared with the party. Shares multiple members' stats at once.

Thaumaturge
Wizard's second total support class, Thaumaturge is less straight-forward than Linker. Buffs and debuffs abound with the Transpose skill sticking out for Wizards that want to be more durable. C2 and C3's skills bring more benefits but at the cost of not getting higher Circles in damage classes.

Swell Left Arm - Increases your and party members' physical and magic attack stats.
Shrink Body - Shrinks your target. Doesn't work on bosses but can be specced into via an attribute to also deal damage and debuff the target. Has 2 charges.
Swell Body - Increases an enemy's size. This increases the target's HP but doubles EXP gained and loot dropped. Can be specced into do debuff and deal damage. Has 2 charges.
Transpose - Swaps your INT and CON stats for a duration. Can be specced to even the two stats out instead.
Reversi (Circle 2) - Takes control of an enemy's magic circle and makes it beneficial to you.
Swell Right Arm (Circle 2) - Increases a party member's defense if they are equipped with a shield or physical attack if equipped with a dagger.
Swell Brain (Circle 3) - Increases you and your party member's INT by making your heads larger.

Elementalist
A true elemental mage, the Elementalist brings a host of damage-dealing skills that do either Lightning, Ice, or Fire damage. All damage here sans Stone Curse, which gives some much-needed control for builds light on CC. 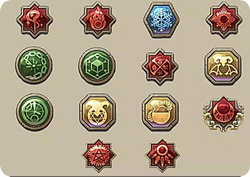 Sorcerer
The one totally minion-reliant magic class in Tree of Savior, Sorcerer relies on the devil boss cards you've picked up on your travels to summon devils who will fight alongside you--and you can even mount them if you go into Circle 2. Circle 3 adds some much-needed direct damage.

Summoning - Summons a devil based on the card you have placed in your Grimoire. The devil's stats are based off your own.
Summon Familiar - Dark damage. Summons a familiar that rushes at the nearest aggressive enemy.
Summon Salamion - Summons the devil Salamion to follow and fight for you. Its attack scales off your INT.
Summon Servant - Summons a helpful servant that increases your SP recovery, AoE attack ratio, magic defense, stamina recovery, and Dark attack.
Attack Ground (Circle 2) - Orders your summoned devil to attack the target area.
Riding (Circle 2) - Allows you to mount a Grimoire-summoned devil.
Morph (Circle 2) - Transforms your current Grimoire-summoned devil into the devil you have equipped as a secondary card in your Grimoire. The summon takes the look and skills of the second summon while taking the stats of the first.
Hold (Circle 2) - Orders your summon to wait and guard the target area.
Evocation (Circle 3) - Dark damage. Attacks enemies in the target area with an attack based off your secondary Grimoire card.
Desmodus (Circle 3) - Sends bloodsucking bats out in front of you, dealing damage to enemies. 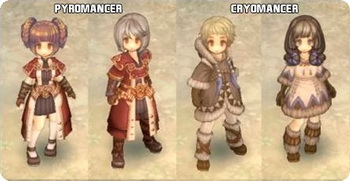 Chronomancer
Another support class, Chronomancer takes control of time to turn the tide of battle--especially in C2 and C3. Chronomancer's skills are sufficient in C1 but C2 and C3 bring some real game-changing abilities with Haste, Backmasking, and Pass.

Quicken - Increases you and your party's attack speed for a duration.
Reincarnate - Brings a defeated monster back alive where it died a few seconds prior.
Stop - Stops time in the target area. Enemies within that area cannot take damage during this time.
Slow - Puts down a magic circle that severely slows enemies who pass through it.
Haste (Circle 2) - Increases you and your party's movement speed for a duration. Can be specced into via attributes to also increase evasion.
Backmasking (Circle 3) - Rewinds time around you to the exact same enemy placement and states as there were a few seconds ago.
Pass (Circle 3) - Reduces you and your party's cooldowns by a set amount, with that amount increasing per skill level.

Necromancer
Necromancer is in its own category among the other Wizard classes in that it must collect its own materials to use its abilities, and collecting those materials is a big part of playing the class. Each of its abilities deals Dark damage and, aside from those that collect corpses, they all consume corpses in varying amounts. C2 makes corpse collecting easier and brings some significant damage.

Gather Corpse - Deals damage and picks up corpse parts to be used with other skills.
Create Shoggoth - Summons a Shoggoth minion with stats based on the stars of the cards you have in your Necronomicon, with its attack and defense relying on your INT and SPR. Consumes 30 corpses to summon.
Flesh Cannon - AoE attack that throws corpse parts at the target area to deal damage. Consumes 15 corpses.
Flesh Hoop - Summons a shield around you made of corpse parts that deals damage to enemies it touches. Costs 5 corpses.
Dirty Pole - Raises a corpse wall in front of you, dealing damage and afflicting the Decay debuff to enemies. Consumes 5 corpses.
Disinter (Circle 2) - Collects a corpse from a dead enemy.
Corpse Tower (Circle 2) - Constructs a defensive tower in the target area that attacks nearby attacking enemies.
Raise Dead (Circle 2) - Summons skeletons to follow you and attac

Alchemist
The Wizard's one marketable class, Alchemist focuses on creating potions and altering equipment to make it more effective. It only has one damaging ability, but allows you to open up a gem roasting shop for other players at C2 to make some good money.

At the time of writing there are only two Circles for Alchemist.

Combustion - Throws one of your items on the ground to explode and deal AoE damage to enemies.
Dig - Digs up alchemy materials.
Item Awakening - Enter a special dungeon for an equipment item of your choice to unlock its hidden option. Higher levels in this allow for more party members to join and fight.
Briquetting - Combines two pieces of equipment for a chance to improve one's minimum and maximum attack. Could improve or worsen it depending on your luck.
Tincturing - Craft potions using alchemy recipes. Has attributes for extra buff potions.
Magnum Opus (Circle 2) - Create an item.
Gem Roasting (Circle 2) - Allows you to set up a shop to smelt and enhance gems for other players.

Runecaster
Runecaster is one of the slower Wizard classes. Each skill requires 8 seconds of cast time and requires a full charge, but each one is powerful in its own right. Not an ideal class for players who want to be more mobile but certainly one of the more powerful options for Wizard players.

At the time of writing there is only one Circle for Runecaster.

Warlock
Warlock is one of two Rank 7 classes that takes your magic casting a more sinister route. Each of its skills does Dark damage and focuses on some heavy AoE damage that chains together very well. It's less sustainable than Featherfoot but really brings the pain.

At the time of writing there is only one Circle for Warlock.

Featherfoot
Featherfoot is the other side of the Dark damage coin Warlock is on, but instead of the insane damage output Warlock gets Featherfoot gives some survivability when fighting beast, evil, and insect-type enemies and inflicts status ailments.

Blood Bath - Deals damage when attacking any enemy but specifically heals you if you attack a beast, devil, or insect-type enemy with this attack. Inflicts Bleed.
Blood Sucking - Deals damage to a beast, devil, or insect-type enemy and recovers your HP. Channeled and consumes SP per second.
Bone Pointing - Summons a pointed bone that points at enemies and deals damage and curses them.
Ngadhundi - Stabs an enemy with a cursed bone. Enemies hit with this skill will be affected by Decay.
Kurdaitcha - Put on cursed shoes that leave bloody footprints on the ground as you walk with decreased movespeed. Footprints afflict Curse on enemies.
These are all the Wizard classes currently in the game, up to date with iToS's maximum of Rank 7. More Ranks (and more classes) are to come as the game gets further updated! But for now, hopefully this information all laid out makes your Wizard class decisions a little easier

TREE OF SAVIOR'S MAJOR COMBAT REVISION IS HERE, FREE ITEMS FOR ALL