With the addition of World of Warcraft Patch 5.4 fast approaching , One of the most exciting bits of new content we are destined to see in this patch, aside from the much anticipated Siege of Orgrimmar, is the Timeless Isle.

How to Get There?

Recently unveiled from beneath the mysterious fogs of Pandaria, the Timeless Isle is a rather substantial island found off the south eastern coast of the Jade Forest. After Patch 5.4 is released, players will find a Curious Ticking Parcel inside their mailbox. Inside this parcel will be a Curious Bronze Timepiece, that you can click to automatically teleport yourself to your Timeless faction base. It is unknown if there is a prerequisite for this item to appear in your mail. Currently on the PTR the item appears directly after log in with no other work needed. 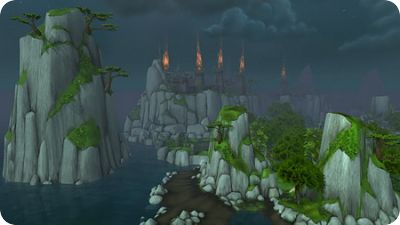 Once you've arrived at your faction camp on the Timeless Isle you will find a short quest chain that will introduce you to the island and more importantly Timeless Coins, the currency here. After that players may be a bit confused about what exactly they are supposed to be doing here. The answer to that question is really anything you want.

The Timeless Isle is designed as an open-world adventure. Here players are encouraged to wander, explore, and discover. On the island players will also find a host of powerful creatures that once killed provide powerful rewards. The best part of the island is that everything, except the world raid bosses are able to be killed by the solo player. In another twist, Rares on the island are “no-tap”. That means if you see someone fighting one, jump on in, even if they are from the opposite faction. Every person who takes part in killing the Rare will benefit from killing it. Elites on the island are the standard “group-tap” and will only benefit the first person (or group) who hits it.

Every mob on the island drops something unique. Easier enemies drop smaller items, such as consumables that will grant you Timeless Coins, while tougher enemies can drop epic BOA tokens. These tokens can then be used to gain Item Level 496 loot, upgrade tokens to gain ilvl 535 gear, Lesser Charms, battle pets, and more!

To encourage this idea of exploration and adventure on the Isle, Blizzard has introduced the Event System. Along with this system new UI elements have been thrown into the mix. For example, any time you come near to any of the rare spawns, Elites, chests, and events they will automatically pop up on your mini-map. This means you will almost never miss out on any of the epic loot these provide. With that being said some of these won't be easy to get to and players will have to use all of their skills to reach them.

On the Timeless Island players will have the opportunity to take on several bosses. These bosses include the four August Celestials; Chi-Ji, Niuzao, Xuen, and Yu'lon who can all be found at the ancient proving grounds in the center of the island. Groups of players can come in and pick the any Celestial at any time to prove their worth against. Once defeated the Celestial, each player will receive his or her own personal loot.

In addition to the Celestials, Blizzard is bringing back the much beloved world boss. This world boss is rumored to be hardcore and intended to end-game progression raiders. Ordos by name, this boss will provide players with several challenges. For example, to reach Ordos, players much have received the final Legendary cloak from Wrathion (on at least one character on their account). In addition to this stipulation, once the battle against Ordos has begun, players will not be allowed to enter the sanctuary where the boss resides. Quite the challenge, but one that will present worthwhile rewards without a doubt.

Players will have the option to join the ranks of the Ordon, the followers of Ordos. Players who make this choice will be able to make use of the powers provided by the Censer of Eternal Agony. Using this Censer will automatically flag the player for PvP – even their own faction. Don't think that you can hide either. Once activated the player will shoot bright flames from their skin, showing all those around them that they are ready for action.

Don't think the powers granted by the Censer will allow it to become a quick ganking device. To level things out players who use this power will have their health reduced to 10% of its maximum. This health can be healed back up over time, but makes you pretty vulnerable for at least a short time. For those players on PvE realms, the rules of flagging will still apply and you won't have to engage in combat if you don't wish to. However, PvP realms will find this new ability a menacing new threat. Killing players while under the effects of the Censer will award you Bloody Coins, which can be exchanged for rewards on the island.

While completing the initial quest chain on the island players will be introduced to the Celestial Tournament. Here Pet Battle extraordinaires can face off against other contestants. Those players that become very successful in the tournament may even be grated the privilege to take on the children of the celestials. Of course getting into the tournament will take some dedication. Players must have trained 15 pets to their maximum level to be deemed worthy. Not an easy feat for those of us who use Pet Battles as some side entertainment.