There are many weapons in ESO ,all can be roughly grouped into six kinds.

Picking the appropriate weapon is sometimes a little bit difficult ,because each weapon has its own specific skill tree. 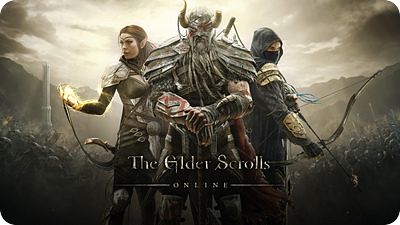 There are six weapons:

Every  role has its own weapons. Two-handed and Dual wiled belong to melee DPS weapons, bows and Destruction Staves are ranged weapons, One hand and Shield are defensive weapon. Finally ,restoration staves are support based.

Regardless of what class you are, you can use any one of them. For example, Templars can hit enemy with bows and Nightblades can heal others. Class is regarded to be connection with three unique skill lines, some of them is useless to you. (making your class basically pointless outside of the passives).

How to choose weapons? 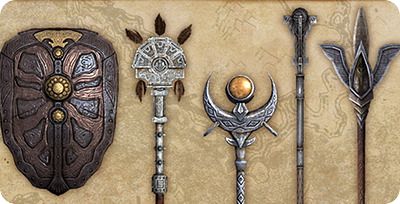 My suggestion is that  you can choose weapon slot one as you main build for PvE, and equip  weapon slot two with some kind of ranged weapon if you are DPS or Tanking/Healing.When a lot of fights are going to happen at keeps and checkpoints ,melee DPS becomes terrible ,because it forces you to hit enemies face to face. Melee gets to stand around and do nothing .so it is necessary for you to use ranged weapons. Nevertheless, a lot of ranged weapons don’t really  work well for solo PvE because ,most of time ,enemies are going to  be up  in your face.

You can switch your weapons at any time in the game, and the only cost for switching is the skill points and the time investment in leveling it up.( which appears to get less the higher level you are anyway . so do not worry about which weapon you choose. Based on our following weapon sets list and their play styles ,you can  decide which direction  you want to go.

This is a big question and  the answer lies in all of the passives in the specific weapon you’re primarily going to use and  your alternate weapon set. After you buy the skills that you want to slot, there isn’t much use to skill points outside of buying skills you don’t want to use (or in morphing skills) ,so it is better for you to buy the passives with extras. Although passive skills looks inconspicuous, but you can do get extra benefits form them ,so you’d  better do that.

Each of the six weapon lines ,as for skills ,usually has a gap closer( for melee weapons) and a knockback. It is proved that it is useful when you try to get close to something to hit it( for melee) or knocking stuff back (for ranged)

We do not plan to introduce every single skill to you, but focus primarily on which weapon is best for your specific play style.

One of my favorites is Two-Handed weapons. It is better than dual wield ,in my view, because it has stronger skills like Cleave, a knockback ,and a gap closer all in one line. Unlike two-handed weapons, the dual wield  only has strong physical attacks, but both of them are good at bringing the pain. It works well for you to get up close to someone in PvP and to hit enemies with a giant weapon. 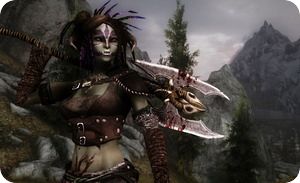 One Hand and Shield

This is the defensive/tanking set and it’s loaded with stuns ,a charge ,and more stuns. the principle purpose of the this set is to lower enemy damage, stun ,taunt ,and disable the enemy. While it does not mean that you have to be a tank to use it ,which care more about damage mitigation than anything else ,so it dose do less damage.

This is a high DPS weapons set primarily used to bring massive pain to enemies ,it’s one of the only melee weapons that has an unmorphed ranged attack( Hidde Blade), and does have a bleed. This is the weapon set for causing a lot of damage and looking cool with two weapons.

Bow is ranged physical damage weapon. Bow’s early game damage output, I think ,is not obvious and find it much superior in PvP than in PvE. Anyway ,the skill focus on poison effects ,AoE damage, and general ranged havoc. If you’re wanting to go ranged for PvP , bow is a good choice, because it works well in choke points.

Statues effects are important to the Destruction staff which also focuses on ranged DPS. It can cause damage by burning and other effects as skills are morphed( including knockbacks and the such).it’s really great in PvP as well as an off-set.

Restoration staff refer to those healing weapons, which are designed for support in dungeons. Healing others is the principle purpose of this kind of weapon. So it is wise for you to shelve it until you’re in PvP or in dungeons. Leveling it up in PvP is a good idea since there is always a lot of people who need some healing.