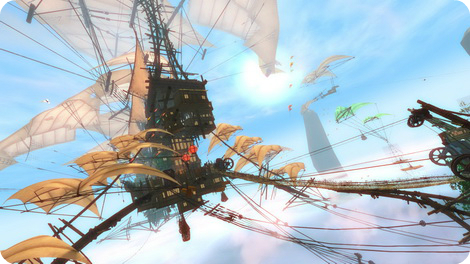 Sanctum Sprint is a mini-game in Zephyr Sanctum. The purpose of the mini-game is a race to the finish! Throughout a race, players must collect crystal and various powerup throughout the area to utilise your abilities. The specific abilities allow you to navigate the terrain, obstacles and opponents. Although it's said inspiration was drawn from Guild Wars' Rollerbeetle Racing, it would be a loose association.

A typical race lasts around 8-9 minutes, but it is possible to complete it around 5. Considering it's only available as temporary content for July, I'd strongly recommend you participate in it as quickly as possible.

Head to the Bazaar (getting a boat from Lion's Arch) and head to Sky Docks Waypoint. The Bazaar although on first glance is confusing, is actually a linear path. Keep heading forward off the boat (using the various power-ups along the way) to reach the mini-game area.

At the beginning of the mini-game you are given 3 default skills. During the course of the sprint you are granted addition skills, from 4 through to 10. The skills in question benefit different types of sprinter, with skills such as Gale benefitting those at the back, while Fake Power-Up obviously benefits those at the front. Think of Mario Kart's Red Shell or Bannana. 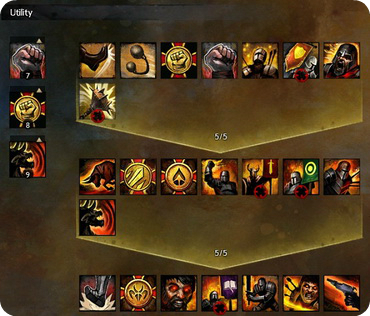 The skills are the following:

There are two types of crystal in Sanctum Sprint: Blue and Orange.

Blue Crystals provided you with endurance (it uses the same endurance bar players have). Endurance allows you to use your skills. Orange Crystal provide swiftness and vigor for several seconds.

Power-ups (which provide skills) appear as collectable items on the track. Displayed as brown coffers or bags, they are identified by the icon on them. Red indicates an offensive power-up and blue, defensive.

In addition to these, you can also find single orange ability-powerups. They appear as a single crystal (rather than a shard) and improve your basic skills (1-3) by improving your jump, dash or leap.

Simply put, during the course of a race you need to follow the arrows. At first this might appear a little confusing, but generally speaking the track is a linear course that requires you to do little more than move forward and utilise the corresponding skill to navigate the vertical or horizontal gap. 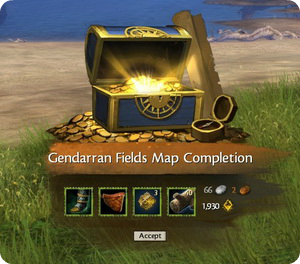 For each race you complete, you receive a chest after the finish line. Inside is usually a green item and a chance of a Catcher backpiece. In all honesty, the rewards are pretty terrible (it's much quicker to buy the Catchers off the Trading Post). However, the races are usually good fun. It should be noted that if you get "1st" you receive a bag of coins.