Revelation Online is a Chinese MMORPG that after a long wait finally released in the West. From the first moment you log-in you’ll notice that the game is quite different in gameplay than other Korean MMORPGs. And that different is good. Revelation tries to take all of the elements prominently featured in MMORPGs and stuffs them into one game.The question is,did they do a good job with it or is it just a bunch of random mechanics? 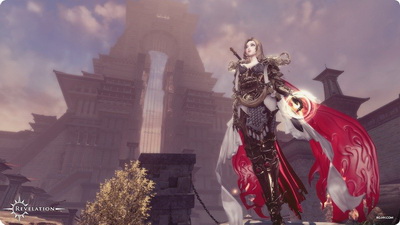 In the first 30 levels maybe the game treats you like a baby. You will click “F,” the button signifying Interact, more than any other on your keyboard as the story guides you from one destination to the next without ever giving the player time to absorb whatever it is that's going on. Quests involve collecting a few items or killing a handful of mobs, before scooting you along to the next area. It's so quick you can't process how the world is connected. It doesn't even give you that much time to process the characters or the story.The breakneck pacing feels tacky, though many other games are equally guilty. It’s browser design principles imbued in a mainstream PC experience. Luckily, it does eventually ease up and you can appreciate you classes' combat prowess.

The combat is very enjoyable and fun , no matter the class you play. It’s a bit of an odd mixture. When you first start playing you're given three options to fight: keyboard, mouse, or action combat. As a melee class I chose action, but the action combat schema is still at its foundation a tab-targeting system—your character locks onto the nearest mob. Though combat’s fast-paced nature makes it feel fluid and varied, separating it from traditional tab-targeting games.Although I think they should just stick to one type of combat as some aren't as effective in PvP as others.

Abilities are bound to your mouse buttons; 1-5; then Q, E, R, T, G; and F1 through F6. There’s a lot to absorb. And I found myself using the majority of my abilities during combat. Combat is playing your keyboard like a guitar, constantly moving across the keys as you dish out attacks. The variety of moves keeps combat engaging, demanding player’s attention. It's just really fun and easy to use your skills. Some classes, such as the Occultist, can switch stances from DPS to healing completely changing their schema so that, in a sense, you have two classes in one,which quickly became my favourite class.

During a fight you will move constantly. Telegraphs and monstrous attacks force you to dodge, and some attacks even require jumping to avoid damage. Combat is dynamic and fun. At least when you're fighting bosses. But for typical mobs you’ll group up as many as you can and then unleash all of your abilities at once to wipe them out,which in some cases is harder than it sounds.

PvP, as you might have guessed plays a large role in Revelation Online. At level 40 and up you can enter Battlegrounds which play out like a MOBA-esque type of game. You run down lanes, as NPC warriors clash, and kill the members of the other team. The first team to obtain 100 kills wins. It’s total chaos. It's a place to spam all of your abilities or pick the stragglers as they try to flee. Fun to stomp on other players, which means you want to be the one with the best gear in the fight. Otherwise, you’re going to struggle to obtain a kill, which kinda sucks knowing that it's not that balanced and you won't be reliant only on your skills.

There are also arena duels, either solo, or in 3v3 battles. The arena involves a level of skill and tactics. World PvP also exists, but both parties have to be willing to fight. Otherwise the attacker earns a killer mark, making it possible that they will drop some of their gear if killed. It’s a system that diminishes the appetite for World PvP.