> Home  > World of Warcraft  > Create Your Own Monk in MoP

Create Your Own Monk in MoP

While counting on the days of Mists of Pandaria coming, let's go trough of the new class, the Monk. Announced along with the adorable race Pandaren, this new class is uniquely tied with the traditional oriental theme of Mists of Pandaria. Imagine the Pandaren Monks take every corner of your screen on release day, will you be one of them?

Before making the decision of which race to choose for your monk, you'd probably need more details of the class, such as specializations, profession, or hair style, color and so on. For these details were not often realized in the beta, you may feel lost on the live servers of Mists of Pandaria if you do not prepare yourself well before launch.

Look at what monks wear—leather. We may never know the reason why monks don't wear cloth. Yet the world will know that monks are experts in Leatherworking, for it's the best way that to offering leathers on themselves. While considering good decent gear you may get or being possible to sell your goods in real money, leather working should be the main profession of your monk. Skinning and Leatherworking always comes together. While your monk wears leather and makes leather, he'd like to gather leather by himself.

In Mists of Pandaria, a new resource system set for the Monk, Chi. This resource could be earned from a few moves when fighting, and be spent by skills, Jab and Roll. Jab can create Light and Dark Force, which are used for other skills, such as Tiger Palm. Meanwhile based on different specialization, monks also use other resources. Brewmaster and Windwalker specs use Energy, Mistwalker uses Mana.

If you want to play a Monk effectively, you have to be careful to generate and spend the Chi resource. As Chi is used for your core skills and your ability, to generate it is limited by your energy supply. 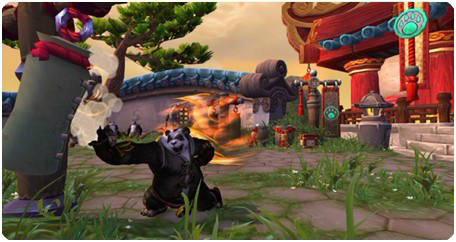 The Monk has three possible talent specs: the Brewmaster, the Mistweaver and the Windwalker. You could choose based on which spec you like. Brewmaster is suitable for tanking. Mistweaver is for healing, while Windwalker is better for melee DPS.

Usually tanks do damages for pulling. But the Brewmaster is lack of strong damage. Yet he does it in a different way. As its name, Brewmaster is a drunken martial art master. He throws Drunken Haze to the foes, causing them drunk and has 3 % chance to make them hurt themselves. Brewmaster has several abilities for avoidance, which would help bypass damages or redirect damage. Brewmaster can create a shield for absorbing damage towards him. What's more, the monk Mastery, Elusive Brawler, can delay the incoming damage thus help healers save your monk.

The Mistweaver has special healing abilities that differ from the ones we know of priests and shamans. Mistweaver drops statues: Summon Jade Serpent Statue, which helps heal allies nearby. And they bounce between players while wrapping up with healing mists. By dropping green balls of healing power, Mistweavers could also get your allies saved. Furthermore, many of the spells of Mistweaver will automatically aim to their target.

Windwalker, walking on air, is extraordinarily flexible on position. Their abilities make them able to do some very cool moves. Like Flying Serpent Kick, makes your monk to fly over a long distance, and at the moment he hits on the ground, he can do damages towards enemies nearby. The Windwalkers can also redirect damage like Brewmasters, but in a different way. The Windwalker flips the damage back to his foe. As a melee DPS class among the three talent specs of Monk, Windwalker is likely to be the best one for leveling alone.