An explosive leak was released in regards to a new Guild Wars 2 expansion. Later that day, Mike O’Brien held a Flashpoint AMA. Here are some of the details of that thread. 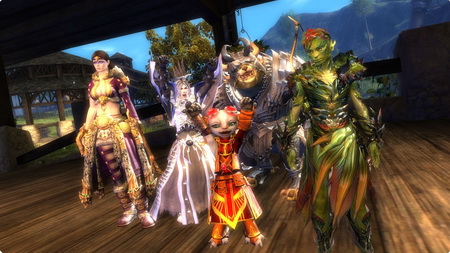 there were some leaks that raised some questions in regards to the new Guild Wars 2 expansion. With over 50 pictures showing ability trees, maps, and more, it drew a lot of attention around message boards and news sites. Yesterday, Guild Wars 2’s Mike O’Brien held a Reddit AMA yesterday for Flashpoint. O’Brien confirmed that there will be an expansion released, hopefully this fall.

“We announced that today’s episode, Flashpoint, is the second-to-last episode of the season. Yes, that means what you think it means: there’s one more episode after this, and then straight to the expansion pack.”

Mike continued to flesh out their plans for the future and how the releases will be handled. From the sounds of it, they have some big plans for the upcoming months. The expansion will release in the same releasing schedule as the episodes within an expansion.

“This time around we have two separate fully-staffed teams that are both hitting on all cylinders. So our rough plan is to slot the expansion pack into the release cadence as if it were an episode: episode 5, then episode 6, then the expansion pack, then episode 1. But we’ll make some allowance for the fact that shipping an expansion pack is a big deal logistically and will probably take longer than the 2~3 months we normally allocate between episodes.”

The question came up in regards to legal action about the leaks yesterday if there would be any consequences for the person’s actions. Mike responded with a clever retort to the people who feel the need to spoil games.

“Spoilers take away the delightful surprises from upcoming announcements and releases, and more importantly they also take away the reveals that you’d otherwise get to experience fresh as you play through the content. If you want to spoil yourself, to open all your presents early, that’s a choice you make for yourself, but do me a favor and don’t make it for other people. Things can quickly become common knowledge around map chat, guild chat, Reddit, etc., and then it gets to the point where no one gets to be surprised and delighted as they play through the game. And, after all, games are meant to be played.”

Questions continued to be asked. One of the topics that were brought up were the World Versus World Battles(WvW) and if there were going to be any changes to the mode.

“The WvW team releases their content when it is ready. We have a variety of things in work, some further along, some still early in development. The team wants nothing more than to deliver great content for WvW but making changes for the game mode is rarely trivial. The team wants to make sure that large system and content changes are given proper due diligence and are in a position to have the best possible impact for WvW players.”

As the head start access has already begun, the final launch of Guild Wars 2 is just around the corner. Before entering the world of Tyria for fun, let’s learn about something of economy in Guild Wars 2, the market, crafting and gathering. If you are a beginner of the game, you might need to take look at the article.

As the launch day of Guild Wars 2 is coming soon, Mmosale has gathered some information about the game and aim to give you some advices to prepare for the significant event on August 28th.

Guild Wars 2 only has one faction while five races in total. In order to make your life easier, we made a list of the races to help you make decision of choosing a race in Guild Wars 2.

With varieties different ways of earning xp, GuildWars 2 allows you to level in your own particular play style. Let's take a look at what we can do to earn xp in GW2

The second Guild Wars 2 beta weekend Event begins this Friday afternoon. For three days, players from all over the world will experience tons of wonders and dangers. And there are some new updates for the coming beta event. Are you ready?