On June 20th, 2017, Final Fantasy 14 will launch its second expansion pack, the details of which were unveiled at Final Fantasy Fanfest in Japan over the Christmas holidays. Expected to be roughly in size to its previous expansion, players will venture to the subjugated empire of Ala Mhigo to once again do battle with the Garlean Empire. 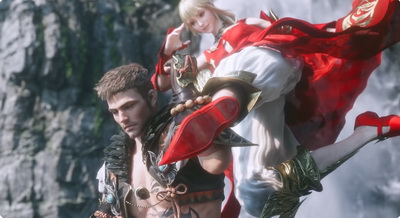 During Fanfest, one new class (called a 'job' in FF14) was revealed with another to be announced closer to launch. That first job will be the Red Mage, a hybrid DPS character that uses both ranged magic and melee attacks. True to their nature, Red Mages will wield magic that wavers somewhere between life-giving white magic and deadly black magic. As they chain spells together, Red Mages build up power that they can unleash in a combo of melee thrusts punctuated by a devastating magical attack. Red Mages are also expected to start at level 50, so players won't need to worry about leveling them up from scratch.

A long-standing tradition for game director Naoki Yoshida is to tease a new job using the shirt he's wearing during the keynote presentation. Earlier in the year, he took the stage wearing a shirt featuring Marvel heroine Scarlet Witch as a clue for the upcoming reveal of Red Mages. This time, Yoshida gave his keynote speech while sporting a Spider-Man shirt, dividing fans on what that might mean for the next job. The most popular theory is that the shirt is an allusion to Blue Mages, who, similar to Spider-Man's origin story, adopt powers from monsters. Blue Mages would make a good fit for the desert setting of Ala Mhigo as well, as they've often had an eastern-inspired aesthetic. A second popular theory posits that the new job could be the Samurai as a play on name Sam Raimi, the director of the first three Spiderman films. Color me skeptical, though, as that seems like a bit of stretch.

A new raid developed by the man behind Final Fantasy Tactics

One of the most exciting announcements for Final Fantasy fans is that Yasumi Matsuno, the mind behind classics like Final Fantasy Tactics and Final Fantasy XII, will be writing the story for the new 24-person raid coming in Stormblood. Called Return to Ivalice, this raid will hopefully be a fun romp down nostalgia lane as players return to one of the most popular settings for Final Fantasy games that hasn't been seen in a decade. Details are scarce, but Keita Amemiya, the character artist from Shin Megami Tensei IV, will be designing the bosses. That means we can probably expect some pretty stellar enemies if his previous work is anything to go by.
Of course, Stormblood also has a new eight-person raid, new dungeons, and primals (one-off boss battles). 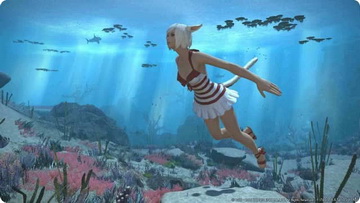 Similar Heavensward's flying mounts, Stormblood will also add a new way to traverse the environment through swimming and diving. If you've played the former, swimming seems like a cut-and-paste of flying but, well, underwater and minus the need for a mount. You won't be able to fight underwater, so it seems the new system is primarily for exploring and traversing the environment. Special harvesting nodes, especially for fisherman, can be found underwater and Yoshida confirmed regular interactions with NPCs are also possible.
Of all the features coming in Stormblood, this is the one that I'm least interested in. Swimming will have a slower movement speed than walking, and without underwater battles I'm not sure it'll be all that exciting. It sure looks gorgeous, though.