Bloodshade Harbor is a new dungeon in Moonwater Plains that includes many fast moves and needs players to use Dragon Pulses and Air Dash frequently. Besides there are many items and mechanics in the dungeon so players should know how they work in order to carry out effective teamwork. 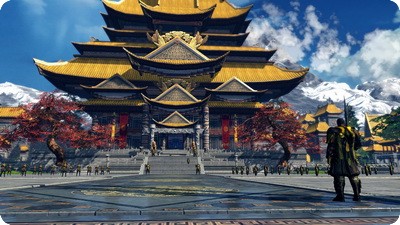 Battle is limited to 5 minutes. In phase one players have to try to maximize their DPS with good use of boss combos, and each class' ability to boost damage to the boss. For new team, it's recommended to plan beforehand and decide the order of boss combos.

In phase two boss jumps to the height and calls out numbers of eggs that will hatch venom worms if you don't destroy them. A gun that kills worms will be available and obviously you have to use it to destroy the eggs. Meanwhile the boss releases two different types of venoms - one can be avoided and one can't. Once the gun hits 30 times the boss will come back to the ground and offers you the good chance to pour everything you have to the boss.

Now steam will come out from underground regularly which boosts your critical attack and move speed, and you just have to go through the steam to gain that buff.

He has a fixed attack order: left fist- right fist - left fist - spin attack - AOE attack. Blade Master can tank all these attacks. Other DPS can attack at rear and only have to watch out for the AOE attack.

Phase two a device will appear and it gives anyone it touches a bleeding debuff which can be stacked. The idea is to draw the device to touch the boss and make him bleeding as many times as possible. So use boss combos wisely. Range class is recommended to do the drawing job.

If you have experience in World of Warcraft's raid you will be familar with the mechanism. Your group have to always maintain the twins' HP in the same level otherwise the Wipe will be triggered.

Two different strategies to defeat the bosses. Depending on your group setup, you can assign 2 tanks to tank Cobalt and Scarlet and the rest of the team focus on an individual boss each time (but remember to change target regularly to keep two bosses' HP at the same level). You divide the group to 2 small teams, each of which fight one boss. Notice that one of the bosses is a Force Master and the other is Kungfu Master. They'll swtich their "class" each time they lose a certain amount of HP.

The battle includes 4 phases. In phase 1, make use of abilities such as seize and freeze to control the boss and the rest of the group try to deliver as many damages as possible.

At phase 2 a replica form of Hae Mujin appears and if you have Summoner in the group, use his cat to tank the replica, otherwise you can assign Force Master (it requires some play skill) to do the tanking. If you don't have either, bring Blade Master up.

Starting at phase 3 Hae Mujin will cast lightning until he's killed. The replica has gone and everyone has to stay alive and try their best to deal damage to the boss. The lightning is very deadly so class like Kungfu Master have to be very careful.

At phase 4 the replica returns but I suggest you fully focus on rushing the boss. Of course you can choose the cautious approach, that let Summoner's cat or Force Master to tank the replica.